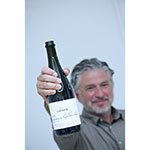 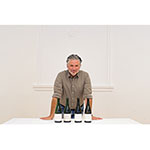 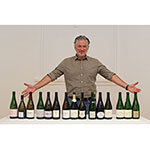 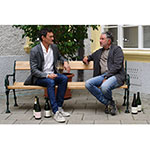 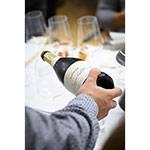 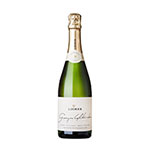 According to the Austrian wine law, a Grosse Reserve Sekt (grand reserve sparkling wine) must age on its lees for three years. But it is up to five years for Fred Loimer, who cultivates, in addition to the vineyards in his home town of Langenlois in the northern Kamptal region, also vineyards in Gumpoldskirchen in the Thermenregion southwest of Vienna. There, at the foot of the 700-meter-high Anninger mountain, are growing the biodynamic Pinot Noir grapes for the Gumpoldskirchen Grosse Reserve Blanc de Noirs Brut Nature, whose premiere is being celebrated with the 2016 vintage. Marine sediments of clay and sand with alpine limestone gravel characterise this second great sparkling wine from the house of Loimer, which is on equal par with the Langenlois Große Reserve Blanc de Blancs Brut Nature 2016. This Blanc de Blancs just recently captured the "Best Sparkling Wine of Austria" title at the Salon Austria Wine. And now, over the last days, the two sparkling wines were presented to international professionals, and were accompanied by Loimer's Brut Rosé Reserve, NV and Extra Brut Reserve, NV. The latter was awarded a gold medal by the British wine consumer magazine, Decanter, in 2020. Says Sascha Speicher, editor-in-chief of Germany’s Meiningers Sommelier magazine and the special edition of Champagne Magazin: "Fred Loimer is one of the leading minds for the new, exciting Austrian sparkling wine world. Dust-dry, sophisticated, and craftsmanship at the highest level. From Blanc de Blancs to Rosé." The Gumpoldskirchen Grosse Reserve Blanc de Noirs 2016 is available now at the Loimer winery and online shop for € 35. It is also available at well-stocked specialist stores.

For Fred Loimer, time and precision are the most important ingredients for a great sparkling wine, which for him encompasses complexity, depth, saltiness and freshness. Time was given to the Gumpoldskirchen Grosse Reserve by a precise point of harvest; in the challenging year of 2016, this was at the end of September. After hand-picking and whole bunch pressing, the spontaneous fermentation lasted two to four weeks, depending on the wooden barrel. The base wine was subsequently matured in these on the full lees for seven months and on the fine lees in steel tanks for a further three months. In September 2017, the wine was bottled for the second fermentation and after 43 months was disgorged in April 2021. Fred Loimer recommends a further ageing period of up to three years.

In the top international culinary sphere. Loimer's sparkling wines are in demand particularly in top Scandinavian and American restaurants. Among these are the Michelin-starred Kontrast in Oslo and Speilsalen in Trondheim. And at Hotel at Six in Stockholm, Selma in Copenhagen, Seks Café in Copenhagen, and – also in Denmark – Kosken pa Odden. Loimer sparklings are imbibed also at SOMM and Grand Hotel Kempinski Vilnius in Lithuania, Restaurant Publique in The Hague, Aberdeen Marina Club and Hapi Fish in Hong Kong, and Wallsé in New York.

Weingut Loimer. Since 2013, Fred Loimer has been producing sparkling wines in addition to his internationally renowned Rieslings, Grüner Veltliners and Pinot Noirs. The sparklings account for about 15 percent of Loimer’s total production and are sold in 22 of his 55 export countries – and the trend is growing. The dedicated biodynamicist cultivates a total of 85 hectares of vines around his hometown of Langenlois, which is in the Kamptal region, and on the completely different (climatically and geologically) eastern slopes of the Vienna Woods in Gumpoldskirchen. The Kamptal is marked by harsh northerly winds, hot days and cool nights, and soils of loess, gneiss, sandstone, gravel and clay. In Gumpoldskirchen, it is warm and dry as this region, located southwest of Vienna, is under strong Pannonian influence. The nearby Vienna Woods provide oxygen-rich air and soils consisting of sandy loam, loamy clay, calcareous brown earth and limestone gravel. Fred Loimer is a founding member of the biodynamic winegrowers' group, respekt-BIODYN, and his winery has been biodynamically certified since 2006.

Austrian Sekt g.U. (geschützter Ursprungsbezeichnung – ‘Protected Designation of Origin’. In 2015, the three-tiered Sekt (sparkling wine) pyramid was created in the wine law. The entry-level category, Sekt g.U. Klassik, stands for nine months of ageing and freshness, and the grapes must come from Austria. The top two levels, Reserve & Grosse Reserve, are dominated by bottle-fermented (traditional method) estate sparkling wines: Sekt g.U. Reserve requires hand-harvested grapes from a single Austrian state, traditional bottle fermentation, and 18 months of ageing on the lees. The grapes for Sekt g.U. Grosse Reserve must come from a single municipality and must be hand-harvested. Also mandatory for this category are traditional bottle fermentation and at least three years of ageing on the lees.

Printable photos attached. Attention: please credit the photos ©. Reprint free of charge if mentioned. Thank you for your coverage and, if applicable, a copy of the report.