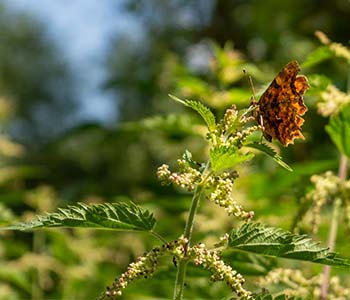 Every year in spring. Time for gardening, pruning the trees, trimming the hedges and preparing the garden beds. In short, to drive away the winter. There are a few things to keep in mind. Like simply ignoring an underestimated plant, the stinging nettle, in the garden and letting nature take its course.

This contribution should be understood as a plea for the stinging nettle. For a rethink, away from regarding it as a weed and pulling it out. Please leave it. Because it is not that at all a weed, on the contrary! Stinging nettle (Urtica diocia L.) is one of the most ancient medicinal plants and for a long time it was also considered an anphrodisiac. Parts of the plant - leaves, flowers and nutlets - are edible, and it is also one of the most important food sources for insects, butterflies and bees. What is new for many is that the nettle is an indicator for the quality of the soil, and that fibres for fabrics can be obtained from the stems. So off you go into the nettles!

After the winter had arrived again in mid-March, we are now all the more drawn out into nature. For all those who have the privilege of owning or being allowed to use a small or larger garden, enjoyable work also awaits. Opinions are still divided as to what the result should look like. Some enjoy a golf lawn with accurately trimmed hedges, others a nature garden with as many flowering native shrubs and trees as possible with overgrown corners as shelters for small animals and insects. It goes without saying that the latter is much better for the environment and biodiversity. How each and every one of us can help here can be read in an article from last year that is still valid.

It is about the stinging nettle. The genus name Urtica dioica L. is derived from urere (to burn). The fine hairs on the underside of the leaves are responsible for this. These "stinging hairs" are pointed and have a small ball at their end that breaks when touched. The sharp cannula that is created in the process scores the main like a hypodermic needle and allows the liquid containing histamine and acid, among other things, to penetrate. This causes the itching, burning and reddish dimples. When we literally or truly get into the nettles, it is in any case highly unpleasant. If you want to get rid of the nasty hairs while working in the kitchen, roll over the leaves with a rolling pin to get rid of the balls.

Stinging nettles grow wherever there is nutrient-rich soil. Be it in the semi-shady forest, in clearings, in gardens or on roadsides. It can grow to an incredible three metres high! In general, they prefer soils with a high nitrogen content and are therefore important indicator plants for gardeners. This is because high-yielding plants such as cabbage, tomatoes or pumpkins feel particularly at home there, whereas low-yielding plants such as beans or strawberries shoot up and are susceptible to pests. By the way, years ago I brought stinging nettles from the forest into the garden, where they thrive very well in a border area. They can be sown in spring and the roots can be distributed in autumn.


Many insects, butterflies and moths look at it. For them, stinging nettles are an important source of food, and they also lay their eggs there. Some of them - peacock butterfly, small tortoiseshell, admiral - are exclusively dependent on it. Nettles are indispensable for at least 36 native species of butterflies and moths - anyone who removes them from their garden is depriving them of their only habitat. Especially when they are in flower, they are particularly buzzed around. If one looks closely, even the human eye suddenly finds the inconspicuous flowers quite pretty.

And taken away. The stinging nettle has many culinary uses and is also really healthy, see more on this in the next paragraph. The small fresh leaves can be eaten wonderfully as a salad, the stronger ones can be used anywhere you would use spinach: Quiches, soups, pasta, pesto, spice mixtures, omelettes, strudels, spreads. They can also be pickled lactic acid, enjoyed dried as chips or boiled and salted as a substitute for rennet. The ripe nettle seeds, nutlets, remind a little of sesame and can be used like it. The still unripe green ones can be roasted and used as a spice, raw as a bread topping. Nettle tea tastes intensely herbal and has the qualities listed below.

As well known, the stinging nettle has many ingredients and healing properties. Particularly noteworthy are vitamin C, iron and calcium, enzymes, proteins, organic acids, chlorine and many more. Its medicinal properties are therefore astringent, blood-forming, blood pressure-lowering, cholesterol-lowering, diuretic, lactic and metabolism-stimulating. The aphrodisiac effects that have been attributed to it since time immemorial should also be included here. Nettle was supposed to ensure potency and fertility for the ancient Germanic tribes. The ancient Romans flagellated their buttocks and loins to restore manhood. And whether a girl was still a virgin was supposed to be determined by whether the nettles retained their fresh green colour when she urinated on them. Holy Moses! Nettle is also used in cosmetics: in shampoos, hair lotions or hair growth products, as it stimulates the blood circulation of the scalp.

What benefits humans usually benefits other beings as well. We move on to plant protection. For example, stinging nettle liquid manure can be used to make a fertiliser and pesticide. Recipe see below. In this liquid manure, among other things, formic acid, a self-defence agent of the stinging nettle, is released and acts against aphids. The agent is diluted with water and is either sprayed or used for watering. In biodynamic viticulture and arable farming, stinging nettle with its constituents is considered "nature's greatest benefactress" and is applied as a tea to strengthen the vine's immune system and is used as a compost preparation (504). Compost preparations support the growth, health and reproduction processes of plants in different ways, i.e. they have an effect on the soil and plants via the compost.

Yes, and as if that were not enough, the magic plant (it is also said to have driven away spirits in ancient times and to have been used as a love charm) was also a raw material for paper, yarns and clothing. The fibres of the stalks were already used to make nets, rope and cloth in the Stone Age, and it was not until the 19th century that cotton replaced stinging nettle. In Hamburg, a tailor can still make stinging nettle textiles today, sourcing them from Nepal. The fabric should be smooth and strong and look like a coarse linen fabric.

You see, a supposed weed can be so valuable. And now at Easter we'll have stinging nettle salad, so long!

Nettle liquid manure (Fischer, Margot (2014): Wilde Genüsse. Das Kochbuch. S. 585)
A container (not metal) full of cut stinging nettles is covered with rainwater or stagnant water and fermented for three weeks in a warm place closed with fly wire, stirring occasionally with a wooden stick. Occasional addition of stone meal softens the smell. After three weeks, the container can be tightly closed. The liquid is diluted 1:10 and used for watering and spraying.