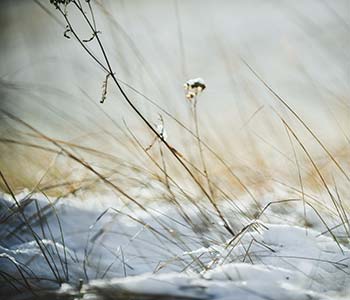 Soil life even in winter. Because the soil never sleeps!

When the juices withdraw from the plants in winter, they go into hibernation. Silence also returns to the soil, but there is no question of real sleep. Even at low temperatures, important processes are going on, dead plant and animal cells become nutrients, and many other processes are also going on. In the seemingly sleeping soil, everything is preparing for the next spring and the reawakening of the plant and animal world.

A look at the wonder of nature in winter. When temperatures drop below zero, the water in the upper parts of the ground freezes. Below this layer of frost, life goes on. Microbes cavort there, fungi are active and so are many small and larger creatures. In order for perennial plants to survive the cold, the roots of grasses, herbs, flowers, shrubs and trees reach far below the frozen earth. And the frost layer itself also has an important function.

When we march across fields or in the forest in winter, we do so on hard and usually frozen ground. This inhospitable layer of frost is important. When soil moisture freezes, ice crystals form in the topsoil. These break up the soil due to their greater volume; some soil particles are pressed together, some apart. In this way, larger clods of soil are forced apart and compacted areas become more permeable again. The soil becomes finer-grained. When the water melts, it makes new paths for itself. This wet-dry cycle reshapes the soil structure. It is estimated that frequent freeze-thaw and wet-dry cycles can reduce compaction by 45 % to over 70 % (in the top layers). Freeze-thaw is the most economical and least damaging type of tillage.

Snow, which is unfortunately becoming increasingly rare, also has an important function for the soil. Due to its large volume with a lot of air, it is a poor conductor of heat and forms an insulating layer. On the one hand, snow prevents heat radiation from the soil and, on the other, protects against the cold from outside. Soils with a deep snow cover often have a thinner frost layer than those without snow. If the soil freezes without a snow cover, the freeze-thaw cycles can severely damage plants by pushing them out of the ground, tearing off their roots and pinching them off. The positive effect of snow extends into spring. Soils that are well insulated - i.e. by snow, organic material such as mulch or leaves, or year-round green manure - thaw more quickly in spring than bare soil. Thawed soils can absorb and store melt and rain water much better than frozen soils, on which the water forms varnish or runs off and leads to erosion.

How perennial plants survive the winter is particularly interesting to read about. This is because in colder climates they develop root systems below the frost layer and release water from their cells into the surrounding soil at low temperatures. This allows the roots of grasses, flowers, trees and shrubs to withstand colder temperatures because they do not run the risk of the water in their cells freezing. The remaining water in the root cells contains higher concentrations of sugars and salts. These act like antifreeze and lower the freezing point of the water in and between the cells. Fascinating how nature has arranged this!

Animal life in the soil also continues unnoticed by us humans. In the course of evolution, many soil animals have developed to withstand temperatures below freezing. To do this, they burrow deep into the earth under the layer of frost over the winter months. In our latitudes, these animal creatures include insects, frogs, snakes and worms. Some of them hibernate, some are awake and need food, which they get from their gathering places as needed.

And then there are the microbes, they are particularly active, diverse and numerous. There are more microbes in a handful of soil than there are people living on earth. Soil microbes, i.e. bacteria and fungi among others, are active all year round; the low temperatures in winter affect them little. They decompose organic matter and add nutrients to the soil. Microorganisms in the soil help to weather rock and minerals, which release important nutrients for plant growth, and also have other important functions for the plant world and thus our nutrition. Dead cells become life again - even in winter. Wonderful cycle of nature!