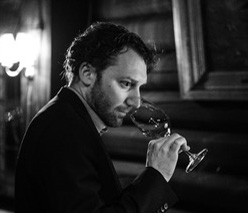 After graduating from hotel and sommelier school, Simon started his career at Lysebu Hotel where he had the chance to work with a huge classic wine cellar. After 4 years the time for something new had arrived, and Simon started working at the Michelin star awarded restaurant Ylajali. Since then Simon has not only become a very reputable Sommelier, but also a well-known Sommelier Champion as he has won his fair share of titles: Best Norwegian Young Sommelier 2010, Best Nordic Sommelier 2013, Best Sommelier of Norway 2015, and Best Sommelier of Norway 2017. Now, when Simon does not compete he can be found working at Happolati restaurant in Oslo, Norway where he is the Head Sommelier. Happolati is a modern restaurant with a fun Asian-inspired menu based on seasonal produce. Happolati offers a varied wine list with an emphasis on classical areas like Germany, Austria, France, and the US. The Austrian focus on Simon's list did not get unnoticed. In the past two years, his wine list was voted Best Austrian wine list by Star Wine List in Norway.

Simon, thanks for taking the time to speak with me today. How does Covid impact your wine program?

Simon: The biggest impact to the wine program was that I needed to buy and offer more fine wine which was not easy since having been closed after seven months of lockdown people were hungry after fine wine more than usual. I had some challenges selling my house wines by the glass, no one wanted cheap wine so it spoiled a lot of times where I decided to take away my house red wine by the glass. I then saw the room to offer a more exclusive wine pairing, next to the standard one, and added a more complex and expensive wine by the glass.

Simon: I had some issues with having too much wine in stock since Norway closed down the first week of November in 2020 when my cellar was filled up for the Christmas season. We only opened again six months later with a cellar full of wine for the winter season and that type of food. Thankfully, we received a lot of support from visiting customers and importers and some virtual wine tastings with producers.

Simon: As my list has a big focus on wines of Austria and Germany, I am constantly in touch with these regions. But Alto Adige is a region I would like to learn more about as wines from this region are starting to come more and more into Norway.

Where do you see advantages for these regions in Norway?

Simon: Germany has a huge market in Norway where the white and red wines are poured all over the country since we have a lot of mussels, shellfish, and fish that pair very well with these types of wines. They also sell more easily since people know them. Austrian wines are also becoming more popular and are also starting to be widely used as they pair very well with Norwegian cuisine too. Alto Adige still has a small proportion in the restaurants, but they also have the potential to grow and be used in the same way as German and Austrian wines.

Simon: It's hard to say, I basically pour what I think is fun and exciting and pairs well with the food, and that could be anything from old school classics to natural peals of wine.

Thank you Simon for your insightful interview. Next up is Head Sommelier Beatrice Bessi from the Chiltern Firehouse in London.