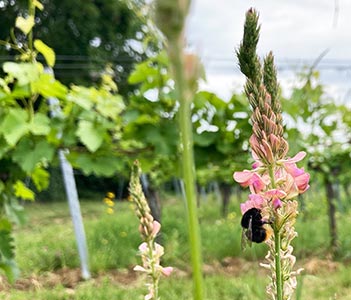 Biodiversity in the vineyards

In spring, not only the trees blossom. Winegrowers who are concerned about the health of their vineyards and nature also let their vineyards blossom. About the benefits of biodiversity for viticulture and society.

They still exist, these vineyards where toxic herbicide is used against weeds under the vines in spring. Recognisable by the brown stripes with their dead plants. This is efficient and cheap, harmful on all levels and also reduces mycorrhisation (formation of symbiotic fungi) on the vine roots. Countless winegrowers – most of them organic or biodynamic, but also conventional ones – prove that there is another way, namely mechanically. They strive to bring nature into balance on their land and achieve countless benefits from this.

If you walk past these vineyards at the end of May, beginning of June, you will see waist-high flowering grass, red poppies, pink seed asparagus, white mustard, purple tufted flowers, yellow meadow goatsbeard, different varieties of clover, cumin and much more. Sown as needed, this greening loosens the soil, enriches it with countless microorganisms and natural nutrients such as nitrogen, makes it receptive to water and stores CO2. It cools the soil, serves to build up humus, protects against erosion and strengthens the vines. It is also a habitat for countless insects, bumblebees, honeybees and wild bees, butterflies, small animals, and rabbits also like to hop through the vine rows. In June, the vines are usually mown, the green cuttings are left lying around and turned into humus by the soil organisms.


Depending on the soil conditions and the weather, the mown seed may or may not remain. It keeps the moisture in the soil, but can suck too much of it away from the vines during severe drought. In that case, the greening can be reduced by cutting the roots underneath with specially developed machines, so-called GreenManagers. This keeps the soil covered with the plant material and more receptive to rainfall. If the soil is ploughed, the upper layers dry out and harden, and rainwater can no longer permeate. In addition, CO2 is released.

Besides the greening of vine rows, there are many other ways of living biodiversity (incidentally, the motto of Weingut Graf Hardegg). Vineyard garlic and herbs, for example, feel at home there, as do hedges and trees. In the past, there were bushes, nut, peach or apricot trees in all the vineyards, which are still obligatory in biodynamic agriculture. They enrich the soil with their roots and mycorrhizae, shade and cool everything under their crown. If these woods are also used economically, this is called agroforestry. In coffee and cocoa-growing countries, by the way, this is probably the only way to save their crops, which are threatened by climate change, and make them sustainably useful. The plants feed on each other, making systemic sprays and fertilisers obsolete; they would only upset the natural balance again. Crop rotation and permaculture are the solution in agriculture with annual plants, but not possible in viticulture. It is all the more important to keep the soil and nature healthy with increased biodiversity and regenerative agriculture.

Of course, biodynamic circular farming also includes animals. One of the goals of this type of farming is to be independent of outside influences and to keep all goods in circulation. This cannot exactly be applied to viticulture, but sheep, goats, chickens, geese, bees, of course, and here and there also fish, have long since found their way into the vineyards or into neighbouring areas. Also – partly endangered – birds by providing nesting sites and feeding places. Grazing, the excrements, the dispersal of seeds and the respective microorganisms by the animals contribute to a great diversity of species in and on the soil and also influence the yeasts on the grapes. The winegrowers all also speak of a great enrichment, also for their private lives, that animal life brings to their vineyards.

Then there is the extended form of vineyard biodiversity. Because there are also areas all around, adjacent fallow land, paths and also bodies of water. Leaving them as untouched as possible, even to the point of letting them go wild, is a gift to nature. With the restriction that these places must be protected from invasive species such as black locust.

Incidentally, all this can also be measured in monetary terms. Soils are increasingly valued according to their vitality and biodiversity. True Cost Accounting of Soil has arrived in the financial world. Healthy soils are logically more valuable than degraded ones. A very mundane reason for biodiversity in vineyards. The social benefits, on the other hand, are anything but mundane. Healthy vineyards are CO2 sinks, promote biodiversity, guarantee the preservation of the land and produce better and more vital wines. If these are not reasons enough!