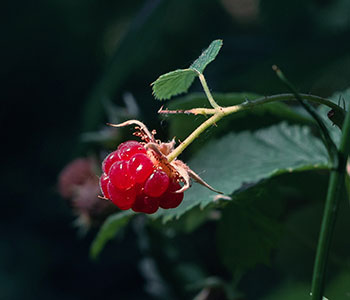 Raspberry time! The fruits are blossoming and ripening in the gardens at the moment, and you can also snack on the red delicacies in the forests. These wild berries are smaller and much more aromatic than the cultivated ones. Which is why I did a little research.

As with all old fruit kinds, there are many more varieties than we realise. Raspberries, by the way, do not belong to the berries, but to the so-called aggregate fruits which also include blackberries. The difference with them is that with raspberries the fruit is only loosely attached to the receptacle and can easily be pulled off. The blackberries are harvested together with the receptacle, which is also processed into the jam.

The raspberry belongs to the rose family (Rosaceae). All varieties of the garden raspberry can be traced back to the wild form, the forest raspberry, which is native to Europe and North America, and there are other original forms in Asia. As early as the Middle Ages, raspberries were cultivated mainly in monasteries in Central Europe, and the first cultivated varieties became widespread in the 18th and 19th centuries. A total of about 740 different raspberry varieties in red, yellow, orange and black are listed worldwide, and the German Bundessortenamt has classified 70 varieties. They are divided into single-bearing summer raspberries and multiple-bearing autumn raspberries and crosses of these.

The few varieties we buy in the supermarket today are special breeds, where the focus is less on taste than on the shelf life and (transport) strength of the fruit. It pays to look for more aromatic alternatives: in the forest or home-grown; small pots are also available for the balcony.

Ingredients & Health: Raspberries are super healthy, rich in antioxidants and fibre (mainly in the seeds). 100 g of fruit cover 13 % of the daily fibre requirement! They are low in calories and, at 34 kcal per 100 g, have only half as many calories as cherries. In terms of vitamin content, they are mid-fielders, 100 g of berries cover 25 % of the vitamin C and 7 % of the vitamin E requirement. The same applies to minerals, where copper, manganese, magnesium and iron score highest.

Raspberries have a positive effect on digestion, protect against cardiovascular diseases, diabetes, dementia and prevent cancer.

Raspberry leaves are considered a medicinal herb and are administered as a tea. They help against menstrual cramps, mild diarrhoea and inflammation of the mouth and throat, and are also used in obstetrics.

And then raspberries taste simply delicious. However, almost all conventionally grown ones have pesticide and fungicide residues. Therefore, please reach for those from organic cultivation, home-grown or self-gathered.

Purée the ingredients in a food processor or with a blender and: ready! Enjoy!