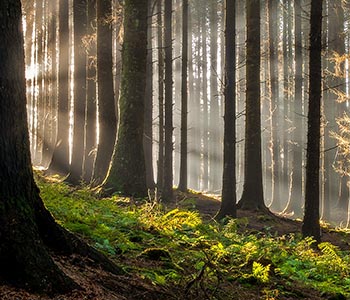 Forest: elixir of life and remedy

On the train heading towards Lake Constance, the gaze lingers again and again on the passing forests. For the eyes, a pleasant change from working at a computer screen. And not only for the eyes! It has long been common knowledge that the forest has a beneficial effect on body and soul. What is new is the finding that even photos of forests have a certain relaxing effect. Logically, the best effect is achieved when you spend time in the forest. Many factors contribute to this. In addition, it is also cooler there and the air is charged with oxygen and beneficial messenger substances.

A short excursion into the forest: why it is so good for us and why individual trees also do their work. Because they also send out messengers and scents and cool the air under their crowns through evaporation. The rustling of their leaves and the chirping of birds are refreshment for us humans and strengthen our health. An apple tree in the garden or a lime tree in the park is enough to relax. 🌳 And the mere sight of a forest is also enough.

Forest walks are relaxing and healing. This can be experienced by all those who seek refuge in a forest in crisis situations and times of pandemics or simply go out for leisure. Everyday life becomes more bearable. The Japanese go one step further with Shinrin Yoku - mindfulness exercises under and with trees called "forest bathing" - and recognise a whole series of scientifically founded positive health effects: stress reduction, positive influence on blood pressure, cortisone levels and pulse. Furthermore, there are indications of positive effects on the immune system. All this also applies - possibly to a lesser extent - to normal walks. They have been used for some time in pain and addiction therapies. And even for the heart, the forest is healing. A green environment stimulates the body to repair blood vessels, form new blood vessels and thus protects against heart attacks. It also supports recovery after a heart attack. The forest has an effect on living beings on many levels; the messenger substances of the trees are decisive, as are our extensive sensory impressions: the rustling of leaves, birdsong, the many shades of green and smells.

Particularly important is the perception of the plant scents with which trees - and plants in general - communicate with each other and with animals: the terpenes. There are probably several thousand of them. One well-known terpene, for example, is limonene, which occurs in the peel of citrus fruits. "Trees emit terpenes to alert useful insects to pest infestations. Or to warn other trees to ramp up their chemical protection mechanisms when predators are in their vicinity," says the website of the German Natural Forest Academy, referring to a number of studies. They were conducted by Japanese immunologists, cardiologists, neurobiologists and scientists from other faculties. We perceive some of these terpenes, others not, because their concentration in the air is too low. Nevertheless, they do have an effect, namely in the cental nervous system.

The research team found "that the blood flow in the prefrontal cortex, a part of the brain, of their test subjects decreased in the forest. In modern industrial society, people mainly use the abilities of the prefrontal cortex, for example, to work with high concentration or to follow a subject. It is crucial for human health that the thinking apparatus can relax and that brain activity shifts to other areas that people perceive as calm. The studies by Park et al. show, based on blood flow in the brain, that the prefrontal cortex quiets down in the forest." After spending time in the forest, the subjects felt calmer, stronger and less anxious, and they also brooded less. Another positive effect is that visits to the forest strengthen the immune system and increase the number of killer cells in the blood. These are a subgroup of the white blood cells and thus part of the immune system. The body uses them to fight cancer cells.

Incidentally, according to a survey in Hamburg at the time of covid-related lockdowns, the mere sight of a forest or a virtual trip into the woods is enough for blood pressure to drop, the pulse to slow down and the concentration of the stress hormone cortisol to fall. More and more retirement homes, hospitals and psychiatric clinics are taking advantage of this to provide a more comfortable environment for their patients and to promote their recovery.

The temperature under trees is also pleasant, as it is up to six degrees lower than in the surrounding area due to evaporative cooling via the leaves and the shade of their crowns. The deck chair under the apple tree is therefore a better choice than under the parasol, under which the heat accumulates. By the way, there are also studies on which tree cools best: If the tree is on a sealed surface, the lime tree is to be preferred. However, the best cooling effect occurs when the tree is in a meadow. In this case, it is best to lie down under a robinia tree.