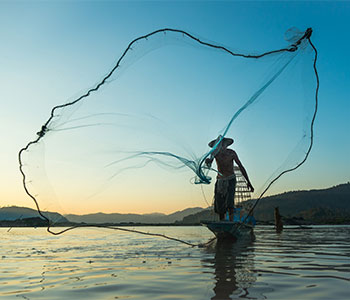 Fisherman's Fritze fishes fresh fish ...* For how much longer?

The nutritional advice recommends fish twice a week. That's easier said than done in view of the fact that oceans are fished out and lakes and rivers are too warm for freshwater fish. So what should we do? Is it over with the herring feast? Over and done with sushi, too? Goodbye trout meunière?

The Film Seaspiracy on Netflix and the answer to it of the Wageningen University: Boykotting Seafood will not save the seas, by Simon Bush, published on the NRC Climateblog on April 16th, 2021

It's not just since the highly acclaimed Netflix documentary Seaspiracy that we've known that there's a lot wrong with the world of fish. That on the one hand our oceans are hopelessly overfished. That, on the other hand, the large fish farms operate with far too high stocking densities, and therefore diseases, parasites (salmon lice!) and canibalism are rampant among the fish, and antibiotics fed on a large scale. Also that especially in the Asian countries slavery is practiced on the ships (see among others Global Slavery Index or The Guardian). That one may trust the sustainability seals only conditionally and and and. So should we completely renounce tuna tartare?

Seaspiracy is a fast-paced documentary about said conditions, mafia-like practices and bought certifications such as those of the MSC | Marins Stewardship Council, the largest and best-known seal for sustainable fishing. The film is accused of being tendentious, of reproducing statements out of context and of distorting facts. This does not seem entirely far-fetched. But even if its truth content were only 50 percent, it would be an ominous and disturbing 50 percent. The ruinous practices of the big non-sustainable fisheries are definitely at the expense of all the people on the coasts who feed on fish. And at the expense of small fishing businesses and one-man fishermen - whose catches we are of course allowed to enjoy on holiday. A detailed response to Seaspiracy can be read on the Wageningen University website: Boycotting Seafood will not save the seas.

So what is the situation now? Can we still eat branzino and cod, halibut and mackerel? The answer, as so often, is "well …" Fortunately, "seaspiracy conditions" do not prevail everywhere, but they do in many regions. And not all fish are equally threatened everywhere, according to the National Academy of Sciences PNAS (USA), polulations are recovering where the appropriate measures are taken. → If you want to find out which fish from which regions are still allowed to end up in the frying pan, take a look at the WWF fish guide.

Fish from trawl nets should generally be avoided. Bycatch (dolphins, whales, turtles, but also fish not needed), destruction of reefs and the seabed and with it important habitat for marine life are the collateral damage of these huge nets. However, Rewe in Austria, for example, offers almost exclusively such fish at its open fish counters, but still keeps its sustainability flag flying high. The Spar Group is already a big step further. It has been cooperating with the WWF since 2011, and according to the Spar Sustainability Report 2020, 99 percent of all fish on offer comes from sustainable sources. Of course, you are always on the safe side if you stick to domestic freshwater fish from organic farms - in a landlocked country like Austria.

The reason for the request for organic is that even with freshwater fish not everything is blissful. As in all aquacultures, freshwater fish ponds are also subject to too high stocking densities, medication, questionable feeding (predatory fish need fish as food: Three kilos of feed are required per kilo of farmed fish, 70 % of which consists of fish meal from wild catches.), water pollution, ... And even out in nature we have issues. Hydroelectric river power plants are a huge problem for fish. Recently, the Austrian daily newspaper Die Presse reported how threatening the increased water pressure downstream of the power plants is for the fishes. And the flow velocity in regulated rivers is also bad, dragging the spawn along with it. That is why many rivers lack fish and are being renaturalized - not only because of the increasing danger of flooding.

In our latitudes, however, there is now a good area-wide organic offer, it is best to stick to it → see left column. Asking about the origin everywhere is definitely helpful: at the fish counter, in the restaurant and at the market. And then just don't buy it if it doesn't fit. This creates awareness that we do care. In the end it remains complicated, but in any case, we won't let it spoil our taste - and simply enjoy our fish with care!