Austrian winemaker awarded in London once more
Hans Tschida was named "Sweet Winemaker of the Year" of the International Wine Challenge for the eighth time. The competition is considered the most important and influential worldwide and puts the Seewinkel winemaker in the spotlight of the international wine scene. 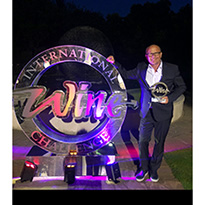 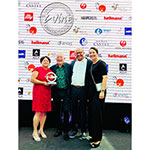 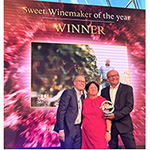 What do Wimbledon title winner Roger Federer and Austria's top sweet wine producer Hans Tschida have in common? A love of wine - one might assume, but both share a far greater commonality: both have won one of the most important titles in their discipline on English soil eight times, making them among the most successful title holders of all time. Thus, Illmitz winemaker Hans Tschida, together with his family, boarded the plane again to receive the "Sweet Winemaker of the Year" award of the International Wine Challenge (IWC), already awarded for the 38th time by more than 100 jurors from all over the world, in London on July 7. "The Sweet Winemaker, now in its 8th year, is still a great award for me and our region. This year I am especially happy to be back on the ground in London. A huge gift in these challenging times!" said the happy best sweet winemaker in the world. In addition, he received the "Austrian Sweet Wine Trophy" and "Austrian Sämling Trophy" awards for the Sämling 88 Beerenauslese 2010 and the "Austrian Sweet Chardonnay Trophy" for the Chardonnay Trockenbeerenauslese 2010 and seven gold and silver medals each for his excellent wines made in Illmitz near Lake Neusiedl a winegrowing region of Burgenland.

"Hans Tschida is a sweet wine legend with very few peers. It’s an enormous privilege to taste his world-class wines every year," said Tim Atkin MW, Co-Chairman of the IWC, paying homage to the Burgenland award winner. The special climate in Illmitz with its varnishes and salt varnishes, allows outstanding wines to emerge under expert hands.

The Angerhof Tschida Winery. Hans Tschida cultivates thirty-five hectares of vineyards in the Seewinkel region of Burgenland in Austria. This area near Lake Neusiedl, with its special microclimate, mineral saline, and sandy soils, light gravel, and dark black earth, influences the wines of this family-owned winery. They are characterised by uniquely balanced stylistics and varietal typicity, even as they receive the highest ratings. "Sweet wine in perfection" is the motto of the estate.

Printable photos in the attachment © IWC. Thank you for your reporting.