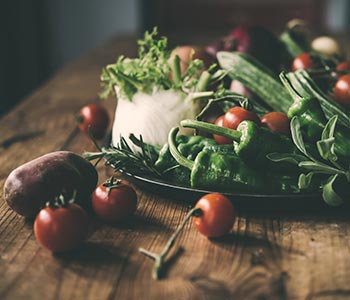 Eating Meat? Of course, but…

Is it even possible to eat meat in times of these incredible scandals? It is! A plea for conscious consumption.


July 2020
Online translation of the original text with DeepL.

You can't look away anymore! Corona cases in German slaughterhouses brought to light what we prefer to close our eyes to. Unspeakable animal suffering and unacceptable conditions for the workers.

I would like to spare you and me these horrible pictures of tortured pigs on my site, since it is dedicated to enjoyment. Hence the beautiful vegetable photo. Meanwhile, I would like to have an analytical look at our meat consumption together with you, and address the question of whether we all have to eat vegetarian. According to Statistik Austria, we consume around 64 kilos of meat per year (2018) in Austria, mainly pork, and the trend is falling.Of this, 2.9 % organic share is accounted for by meat & poultry, 1.9 % by sausages & ham. The majority of our meat consumption therefore comes from factory farming - although organic farming does not always correspond to animal welfare and, conversely, some small non-certified farmers keep it very high. As always, a differentiated approach is required; the figures are sufficient for this discussion. It is high time for a broad, comprehensive discussion. The following information is taken from the article Retten Vegetarier die Welt? (Are Vegetarians Saving the World?) from Bio-Magazin, May/June 2020.

67 % of Austria's total agricultural area is used for meat production, another 17 % for milk production. Only 1 % each remain for fruit and vegetable cultivation. In view of these figures, it is obvious that we can no longer be self-sufficient. Above all, we have to import animal feed - about half a million tonnes of soya - and 157 000 tonnes of palm oil every year. According to a study by the Austrian Research Institute of Organic Agriculture (FiBL), if only one fifth less meat were produced, we could save on these imports. It is well known that cultivation in the countries of origin leads to massive environmental damage, greenhouse gas emissions, displacement of small farmers, extinction of species and deforestation.

According to Intergovernmental Panel on Climate Change (IPCC), the global food system accounts for 37% of total man-made greenhouse gas emissions. Animal breeding alone is responsible for 18% according to the FAO (or 14.5% according to one study), which is more than the total emissions from transport by land and air. The worldwide renunciation of animal food would save 80% of the climate stabilization costs.

There is also the health aspect. Excessive consumption of animal foods is associated with cardiovascular diseases, cancer (colon, breast, stomach, prostate), obesity, type 2 diabetes, osteoporosis, multiple sclerosis, allergies, rheumatoid arthritis, etc. Furthermore, pandemics and antibiotic residences caused by prophylactic medication administration to farm animals are among the side effects that threaten humanity. We are currently experiencing it. Doctors recommend no more than twice a week meat. This would save our health, the positive impact on the environment would be even greater.

At Oxford University in 2016, a study was made of what the world would look like if we were all vegetarians:

There would be a good seven million fewer deaths per year by 2050, because vegetarians are on average healthier than meat eaters. Two-thirds less greenhouse gases would be emitted into the atmosphere, which would mean massive savings in health costs and costs of climate damage. An area of land the size of Africa would be freed up, former forest areas could become forests again and absorb CO2. We would also need 70% less water. Overall, meat consumption accounts for 43% of our food footprint, a huge potential for savings.

Organic versus conventional meat. According to the Future Food Österreich portal, organic meat scores better everywhere, apart from land consumption and greenhouse gas emissions. The consumption of space is higher, because in organic livestock farming the animals are allowed to take up more space for themselves. Due to the slower growth of the animals, more methane is produced, but less nitrous oxide due to the elimination of artificial fertilizers, the GHG balance should be balanced.

CONCLUSIO. Not really a new insight, but it is now all the better documented: Less and organic meat helps our health and reduces our footprint. Therefore meat has to become more expensive in general (= redirection of EU subsidies away from meat factories to small farmers). The good news: Nobody has to become a vegetarian if she or he doesn't want to. The desire for the - rarer and better - enjoyment of meat may remain!

NUMBERS, DATA, FACTS from Austria
The total area is 8.38 million hectares: 8.27 hectares of land and 0.11 hectares of water. According to Statistics Austria, 2.67 hectares were used for agriculture in 2019, two thirds of which were used for meat production. Absurd figures in view of the 1% share each of vegetable and fruit production ...